by neuroscientia
in IQ data, IQ report, IQ research, IQ survey, survey
0
399
SHARES
2.3k
VIEWS
Share on FacebookShare on Twitter
As usual, monthly survey research was conducted on this platform to collect participants’ opinions about their IQ ranges. Below are the results: 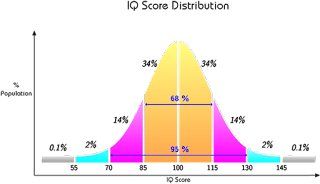 Research Question: How would you range your IQ along the spectrum of IQ scores?

Hypothesis: There will be a disproportionate percentile score of IQ

This brief research utilized a survey method of research where a poll was designed with a 7-point open-ended response pattern. Unlike the previous month, which had nine participants took part in the survey, this month is a bit better.

We had 22 participants took part in the survey, leaving us with more data from which we could draw inferences. With less regard to sample size, let’s have a look at the report.

The research was survey research used to determine the ranges of IQ scores of people who use the IQ test as a measure of intelligence. The results were shown in percentile scores below:
– 59% of the participants agreed that their IQ range between 121-150.

What this data suggests

A gross percentage of the participants have agreed that they are geniuses, however, this might simply a hype. Why? A tiny percentage of people fringe to the extremely unusual scores – mental retardation to the left, while genius to the right. They simply might have taken a junk IQ test that made thus hype – Everyone is not Lawrence Tao or Langhan.

Taken a closer look at such a huge 59% genius percentage, it is also possible that people generally fringe to the highest possible average IQ score (115).

These results also expound that many people do not test their IQ using standard platforms – most platforms are simply junk. How the hell will 13% score between 0-30 (profound mental retardation) and still be able to answer the IQ test at all?

Conclusion
It has been discovered that virtually everyone has tested their IQ at one time or the other, either real or fake test but most IQ tests are fundamentally flawed.

Before You Call That Kid A Dullard