by neuroscientia
in cost of IQ test, IQ, IQ cost, IQ test cost, IQ testing
0
449
SHARES
2.6k
VIEWS
Share on FacebookShare on Twitter
Want to know how much money an IQ test administered by a professional will cost? There is no absolute answer to this question because the cost of IQ tests vary with different factors being considered.

What determines the cost of an IQ test? 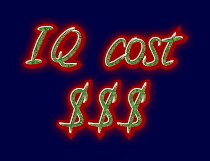 Below are a few factors that usually determine the cost of an IQ test.

Whether an IQ test would cost you a huge amount of money, usually depends on the type of IQ test. Generally, free IQ tests offered online would cost you nothing. But an IQ test that would be administered by a trained psychologist usually cost a few 100s of dollar ($$$). However, this doesn’t mean you should to shy away from a  reliable, standardized IQ test.

Whether you are going to take Mensa, Wechsler or Raven’s test would definitely take away some $$$s from you. You don’t want to take a crappy IQ test. Do you?

The cost of an IQ test is almost always determined by the person who would administer it. A psychologist would want to pay some bills with that; few bucks though. If you are looking to test your IQ for free, yet want to get a reliable score, you may go to a Ph.D. student who might be ready to offer the test to you freely, as he would want to practice it on you. So both of you would benefit, anyway.

3. Purpose or intent behind the test

On the other hand, your intent might be social belongingness, you might want to join Mensa, Pars or High IQ Society. It might also be that you want to familiarize yourself with professional IQ tests in order to get some degree, job etc. Obviously, that would cost some bucks.